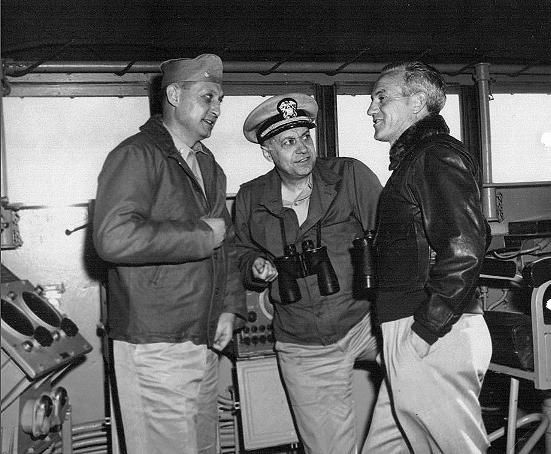 The above picture and all other material on this page, donated by Jean Clarey (widow of Admiral Bernard A. Clarey)

As soon as the cruiser Helena got out of Pearl Harbor she ran into a choppy sea. But one of the junior officers told me: "These are ground swells. Once we get past the island of Oahu, she'll smooth out."

We were on the bridge with Capt. Lawrence H. Martin, commander of the Helena, and all eight of us civilians were taking last looks at Honolulu where we'd spent six days as guests of the navy.

Now, we'd embarked on a five-day cruise to Long Beach where the Helena crew to signalize return from eight months of Korean war duty would present a $6500 trust fund to a seven-year-old Montana boy "who didn't get a proper start in life."

But as it had at Pearl Harbor, the navy had a program lined up for us, aboard the cruiser. "Nothing special," explained Capt. Martin, "just routine firing practice, tactical drills, and some tours about the ship so you can see how she operates."

Capt. Martin is no stranger to San Pedro. Twenty years or so ago, he served aboard the battleships Pennsylvania and Oklahoma here. In 1944, he commissioned and took to war from San Pedro the destroyer Lowry, the first "2200" type destroyer built at Bethlehem shipyard.

Ahead of us, the cruiser Toledo, also returning from Korea, plowed through the whitecaps and we followed on the green, blue and silver carpet she laid on the sea.

There was an air of excitement about the ship, the anticipation of the 1500 enlisted men and 78 officers of going home. "Some of the boys have got channel fever bad," quipped a lieutenant.

During two tours off the east coast of Korea (the Helena was there for three months in 1950), the Helena fired 10,085 rounds of eight-inch and 12,998 rounds of five-inch shells at the enemy.

Ranging up and down the east coast of Korea, the Helena had conducted bombardment and interdiction missions at Wonsan, Chongin, Rashin, Chuuronjang, Musudan, Songjin, Tachon, Kosong, Iwon and the Hungnam-Hamhung area.

One of the stories crewmen tell is that the Helena shot up a Wonsan warehouse where a North Korean general was to take a bride. But whether the shells shot up the general, too, no one seemed to know.

Right after lunch, we saw at first and what the gunners could do. By this time, Oahu had slipped from sight beyond the horizon, but we still rolled in the choppy sea.

But rough sea or smooth sea, it makes no difference to the guns once they've been set on the target by as complex a system of radar and electronic computing machines as you'll ever see.

The Helena shot down at 4000 yards three sleeve targets and came mighty close to getting a fourth as the sleeves were towed parallel or over the ship by planes from the Barber's Point Naval Air Station.

When the first sleeve went down, Capt. Martin said: "Why don't you get in the turret for the next run?"

I crawled in a five-inch gun turret, found 14 other men there engaged in one job or another in loading and handling the discharged shell cases. When the firing started, the turret's jerky jiggling in synchronization with the aiming mechanism, and the wh-u-ump of the discharges reminded me of a ride in one of those electric-powered "bump'em" cars you see on the pike.

Next day the Helena went alongside the Toledo for a transfer at sea. As the Helena's bow went deep into the wind-born whitecaps, spray splashed high and over the forward part of the ship, drenching the crewmen assigned to catch the Toledo's line and rig the transfer line.

As I watched this, I suddenly realized with surprise that I hadn't been seasick, truly something unusual for me. So I was fortified then to enjoy even more the good food aboard.

We had meals with every mess on board the Helena, a lunch and a dinner with Capt. Martin, a dinner with Capt. J. W. Ailes, chief of staff to Rear Admiral R. E. Libby who stayed in Korea for the truce talks; lunches with the first class petty officers; and lunches and dinners with the commissioned officers.

Between meals, we visited every part of the 675-foot cruiser. I talked to a civilian friend on the Toledo by radio telephone, marveled at the engines, the radar and other electronic equipment; bought smokes at the ship's store; drank orange juice at the soda fountain; watched the laundrymen wash and iron; and noted the never-ending job of housekeeping.

In making the rounds I finally found a navy man whose home is in San Pedro. He's J. A. Fejarang, 31, steward first class, whose wife Bonnie and daughters, Delores, 5, and Priscillia, 3, live at 223 Fifteeth St. Fejarang has been in the navy "11 years, 8 months and 10 days," on the Helena since June 1950, plans to stay in the service.

Most spectacular thing on the trip was the star shell drill one night. The Toleda and Helena pulled three and a half miles apart, then took turns in firing star shells over each other. The effect momentarily was a giant Christmas tree in the Pacific sky.

WE saw a movie every night. In fact, to accommodate the nearly 1600 men aboard, seven movie shows were held every evening in different parts of the ship.

We were to see a smoker, too, six acts of entertainment and some boxing matches on the fantail. But the wind and choppy sea caused three postponements and finally the cancellation of that event.

By the third night, every one was agreed that "this is the roughest crossing from Pearl to the mainland we've had."

But they forgot all that once Long Beach came into view. Dressed in their "blues," they were happy and smiling in anticipation of reunioins with sweethearts, wives, families and friends. And so was I.