Permission to post this story has been granted by the US Navy Cruiser Sailors Association.
The story appeared in the USNCSA magazine in their Fall 2000 issue.

I don't remember how I got this picture but I have had it since 1940. The ship's commanding officer at the time was Captain De Mott who is not in the picture. 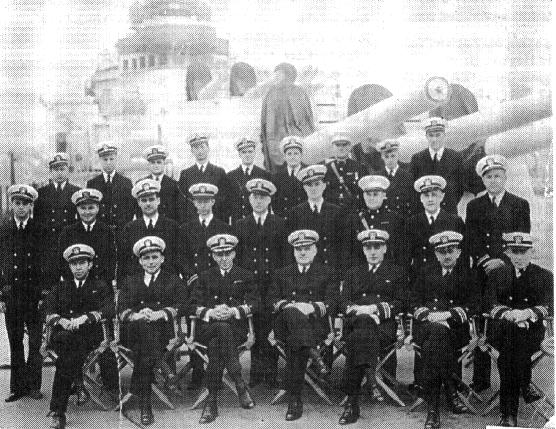 I reported aboard the Helena at Brooklyn, New York Navy Yard in June 1940 from the President's Guard Detachment, Marine barracks, Washington, D.C. I spent a lot of time on the signal bridge when I was not on duty and after chow in the evening while at sea, so I got to know and see these officers a lot. I also got to stand quarter deck watches with a lot of them. There were a lot of interesting times while at sea and watching Captain De Mott who by the way was the senior captain in the Navy at the time. (I found this out by looking through a book on the bridge which gave the name of all Navy officers and how they rated according to the number after their name.)
When we left Brooklyn, New York and joined the Pacific Fleet at Pearl Harbor in November 1940 we were probably the newest ship in the fleet. In just six months time we broke several records; we broke all records for gunnery and launching four aircraft. I was on the bridge at the time when Commander Richardson had a stop watch in his hand, when I heard him yell out, "we broke the record."
Our gunnery officer was Lieutenant Commander Duke. In the picture he is the second on the left front row. He was a very good gunnery officer and this is probably why the Helena Guns were so accurate during the attack on Pearl Harbor and in the battles in the South Pacific.
While stationed at the Marine Barracks, Washington, D.C. on August 1, 1945 I hailed a cab that was coming up from the Navy Yard a block away and he stopped for me in front of the main gate. When I got in the back to my surprise was a Navy Captain and it was Duke our old Helena Gunnery Officer. We talked about the happy days on the Helena operating out of Pearl Harbor and then I asked him where he was going. He told me he was going up to Norfolk, Virginia to take command of the USS Missouri. One month later he had a lot of guests aboard to sign the surrender papers ending WWII in Tokyo Bay.
In the picture the second officer on he left second row is Lieutenant John Chew who I stood quarter deck watches with several times and in 1966 while attending the 25th anniversary of the attack on Pearl Harbor with the PHSA (Pearl Harbor Survivors Association) I with seven sailors from the Helena in a hotel room one evening when one of them said he had just taken a cruise around Ford Island and saw a sign on Ford Island that said "Vice Admiral Chew's Headquarters." We all wondered if it could be the same Chew we knew on the Helena in 1940-41, so we got on the phone and called him at the number in the book; his wife Julia answered the phone and when we told her who we were and that we would like to speak to the Admiral, she gave us a number at the Officer's club, at 11:00 PM (2300 hr.). We called him at the club and he talked with each of us for several minutes. The next day we all got a phone call inviting us with our wives to a cocktail party at his home on Ford Island. He told us that the Admiral's Barge would be at the dock in Pearl Harbor to pick us up at (1300 hr.); when we arrived at his dock on Ford Island, there he was with his wife Julia to greet us when we stepped on the dock. We all had a great three hour bull session and a lot of pictures were taken which I still treasure. Another person in the picture is Lieutenant Junior Grade Jim (Jungle Jim) Baird who I also stood quarter deck watches with; he was a star tackle on Navy's Football Team in 1937 38 and they beat Army. I saw him again in Reno, Nevada at the Helena's ships reunion about 12 years ago and I showed him the picture and to my surprise he had never seen it, so I promised him I would have a copy made and send it to him which I did and got a very nice thank you letter.

(The story does not provide positions
of the officers in the picture. Ed.)