The first reason I like the Marines:
They set high standards for themselves and those around them, and will accept nothing else. 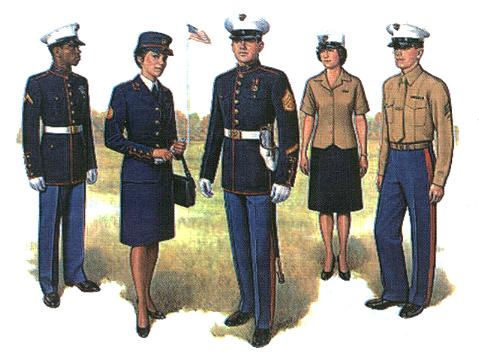 It occurred to me that the services could be characterized by different breeds of dogs. The Air Force reminded
me of a French Poodle. The poodle always looks perfect . . . sometimes a bit pampered and always travels first class. But
don't ever forget that the poodle was bred as a hunting dog and in a fight it's very dangerous. The Army is kind of like a
St. Bernard. It's big and heavy and sometimes seems a bit clumsy. But it's very powerful and has lots of stamina. So you want
it for the long haul. The Navy, God bless us, is a Golden Retriever. They're good natured and great around the house. The
kids love 'em. Sometimes their hair is a bit long. . .they go wandering off for long periods of time, and they love water. Marines
I see as two breeds, Rottweilers or Dobermans, because Marines come in two varieties, big and mean or skinny and mean.
They've got really short hair and they always go for the throat. That sounds like a Marine to me!

So what I really like about Marines is that 'first to fight' isn't just a motto, it's a way of life. From the day they were
formed at Tun Tavern 221 years ago, Marines have distinguished themselves on battlefields around the world. From the fighting
tops of the Bonhomme Richards, to the sands of Barbary coast, from the swamps of New Orleans to the Halls of Montezuma,
from Belleau Wood, to the Argonne Forest, to Guadalcanal, and Iwo Jima, and Okinawa and Dong Ha, and Beirut, and Grenada,
and Panama, and Somalia, and Bosnia, and a thousand unnamed battlefields in godforsaken corners of the globe.

Marines have distinguished themselves by their bravery, and stubbornness and aggressive spirit, and sacrifice, and love
of country, and loyalty to one another.

They've done it for you and me, and this country we all love so dearly. They asked for nothing more than the honor
of being a United States Marine.