In August 1985, I received a letter from the Department of the Navy giving Chris and me permission to go on the Next Tiger Cruise in December. I was elated and I called Chris to see if he could get permission to skip school for that time. Of course, he said he would be able to and he was very excited to be going. We would meet the ship in Pearl Harbor and report on board on December 13 and would depart Pearl Harbor on December 13 and arrive in San Diego on December 21. 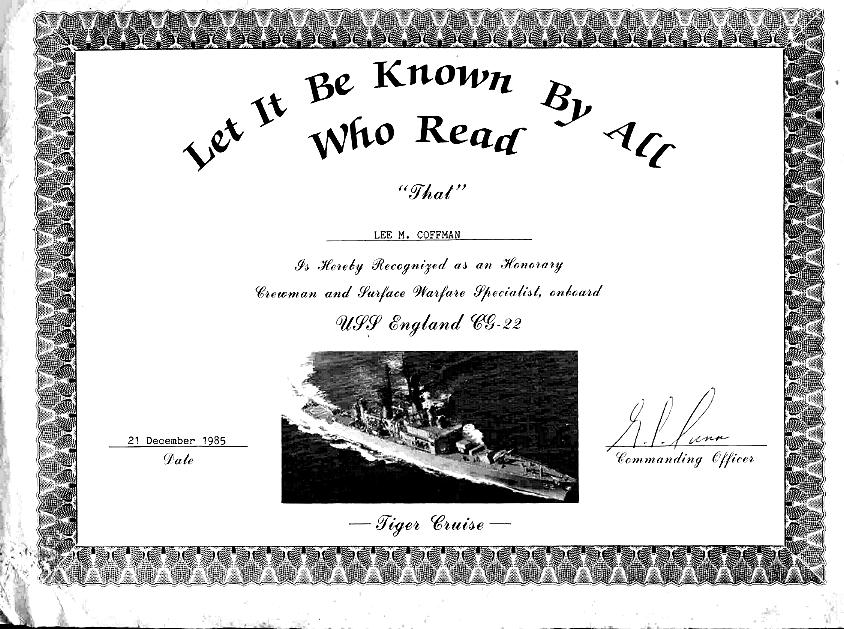 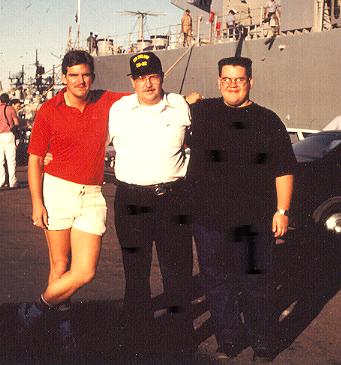 Chris and I flew out of LAX at 12 noon on Friday December 13 and arrived at Honolulu Airport at 3:30 pm and Gary was there to meet the plane. It was so great to see him; he looked more fit and handsome than ever. We took a taxi to Pearl Harbor to report on board the USS England. 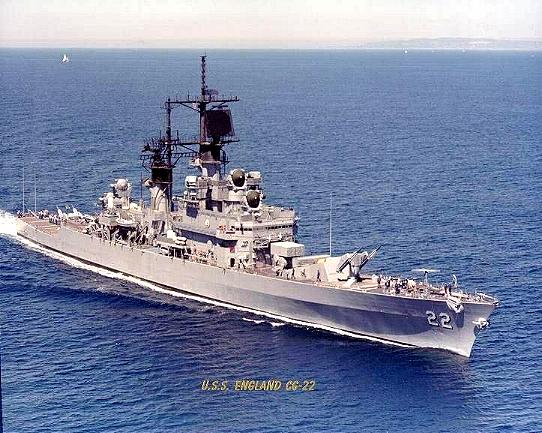 To visit the USS England CG-22, click on the ships picture

She was a fine looking ship and I could tell that Gary was so proud to have his Dad and his brother there. We went on board and were assigned bunks and lockers for our gear. Gary said," Hey, guys it is still early. Let's all go on liberty in Honolulu." I told him that was a great idea. We left the ship and took a taxi to Waikiki Beach. We strolled up and down the main boulevard, visited many gift shops, and then had dinner at a fine restaurant. Then we strolled along the shore and took in the scene at the famous Waikiki Beach. We stopped at a few bars and the three of us had a great time. Gary said that it was the best liberty he had ever done and it was special sharing it with his brother and Dad.

On Saturday morning, we went on a tour of Oahu Island, which was very interesting. The tour bus drove completely around the island and took all day. We visited many beautiful sights, downtown Honolulu, the USS Arizona Memorial, Diamond Head, fabulous beaches, tropical forests and a pineapple plantation. We arrived back at the ship in the afternoon in time for evening mess (meal). It was so great being on a Navy ship again! For me it was like stepping back in time 30 years, the men in their uniforms, the mess line, the messages over the loudspeaker and general routine of shipboard duties. I loved it and I was so grateful that Gary had invited us aboard his ship.
The next morning, Sunday, I was up early at Sam to watch the re-fueling of the ship. After the re-fueling operation the ship's loudspeaker blared," Now hear this, all hands lay to, to weigh anchor!" We were under way, slowly sailing out of Pearl Harbor. We had beautiful views of Oahu and other islands as we passed by them. It was wonderful to be at sea again on a navy ship, it brought back so many memories to me. This is something I had missed for many years, now I was experiencing it again; 1 was thrilled at being there. I loved to watch the ship slice through the huge waves and smell the clean salt air. Moreover, the sunsets were spectacular; the nights were awesome with a clear view of billions of stars.
The next five days were filled with interesting operational and weapon demonstrations. man overboard drills, all of the guests participated in firing some of the weapons, shotguns, .45-caliber pistol and 50-caliber machine gun. Many types of missiles were displayed and their operation explained. We had a top side barbecue and there were movies shown every night. Gary's crew had their own hide out, reached by climbing a ladder to a remote room. Inside the room was a library, a stereo, hundreds of music cassettes, a video player and the crew's secret stash of videos and a cache of snacks. Gary, Chris and 1 spent many happy hours there when we were not doing other things. Gary showed us the place he loved to sit with his cassette player headset on and listen to classical music as he watched the ocean and the wave's crash over the ship's bow I was so pleased to hear that because that is just what I used to do on my ship when I was out to sea. Gary said he would keep in shape by jogging around the ship on the main deck 10 or 12 times, about distance of one mile.
One day the ships crew conducted a tactical battle exercise and Gary was the chief coordinator from the C'IC, Combat Information Center. It was a thrill to me to hear my son's voice over the loudspeakers giving orders and passing on data about tactical maneuvers. I was so proud of him. On Wednesday December 18. there was a promotion in rank ceremony held on the main deck and Gary was one of the participants.. he had advanced to the rank of Petty Officer First Class. I was so proud when he stepped up to the commanding officer. saluted and received his First Class stripes. There is an old tradition in the Navy. when a sailor receives his new stripes the rest of the crew line up and `Tack" them on to his arm with a hefty punch! I gave him a healthy "Tack` myself At the end of the day. poor Gary's arm was black and blue. 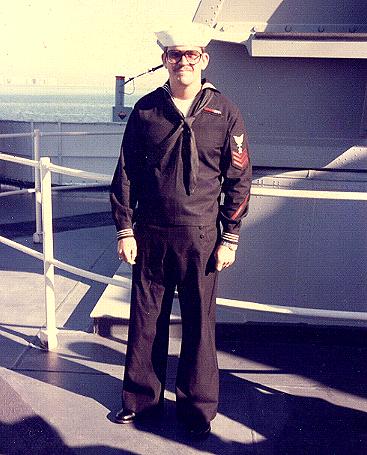 The rest of the cruise went smoothly and every day I soaked in the experience. There were more exercises and demonstrations. but I concentrated on just enjoying being out to sea because 1 knew it might be my last time ever. It was a very special time being with my two sons and all of us experiencing this adventure together. However, the time passed by all too quickly and before we knew it.. it was Saturday morning December 21, and the ship was approaching San Diego Harbor. The ship passed Point Loma and headed into the harbor. As we neared the pier, we could see Kathy, Tim, Melissa and Florence waving to us from the shore. Soon, they were able to come on board and we all had a warm re-union. 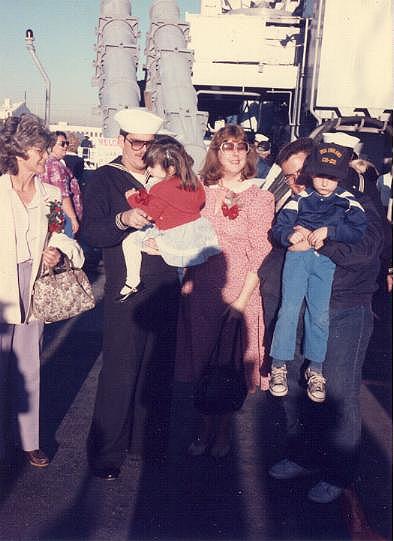 Gary had put in for a 30-day leave, so he was able to leave the ship_ We all went out to a great Mexican dinner and then we drove Gary and his family to their apartment As we said our goodbyes I told Gary,- Gary. thank you for the experience of a lifetime. I shall never forget it." Gary said he was thrilled to have Chris and me with him on his ship. One of the best times. he ever had We promised each other to stay in touch and then Florence drove Chris and me home.

In February 1986, Gary, Kathy and the kids came and visited me for the weekend in my apartment in Hawthorne. Florence and I had parted in August 1985 and I was living in my own apartment now. We had a good time together and it was great to see them again. Gary told me that he was being assigned to another Navy school in Moorestown, New Jersey. Ti was an advanced weapons system called the AEGIS Weapons System. He and his family would move there in July and find a place to live there. I was happy for him but I had hoped that we could set up another camping trip. He said that there would not he time because his ship was going on a months training exercise in May and they had to pack and get everything ready for the move. I drove to Imperial Beach again in June 1986 and visited for the weekend. Soon after, Gary and his family moved to New Jersey.