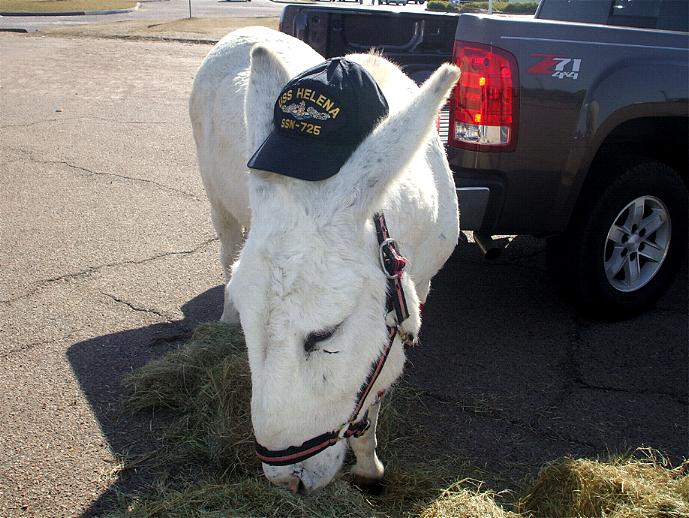 The following received via email on 17 March 2008.

Thought you might get a kick out of this.
Background: I was attending the yearly Army/Navy college football game day barbecue on Fort Gordon, GA.
Both commands (Army and Navy) mustered in the parking lot of the bowling alley prior to kick-off.
The Army mule mascot was left unattended so I decided to decorate it properly.
The base paper refused to print this picture probably because we beat them 38-3!

I tried to put my cap on our Navy goat, but he tried to eat it.

The date of the game was December 1st, 2007, afternoon.
On the night before the game, of course, there was much inter-rival frippery that occurred.
I work as an Army contractor here at Fort Gordon and was pleased to see that the main sign on Gate 1 of Fort Gordon, US Army Post read
"Welcome to PORT Gordon, US Navy.."
We had banners hung from every major building on base “Go Navy Beat Army!” etc.
We painted Go Navy! on the parade field as well so the Army trainees had to march on it the next day, in shame.

I rode Helena in the early 90's on a mission during her WESTPAC patrol.