I have been reading the account of the shakedown cruise and it is not a complete account of shakedown as I can remember some things that were not included.

The time line as written is;

The ship was on It's 2nd trip to New York and left there for Gitmo arriving on Nov. 3, 1945.
Left Gitmo on Jan. 31, 1945 arriving Boston Feb. 4, 1945
This information was taken from the ships log and no doubt is factual, but it is not a complete accounting of the shakedown cruise.

The above had to be associated with the second cruise to Gitmo. The ship went to Gitmo the first time shortly after we were in New York for Navy Day. I remember also being tied up at the Philadelphia Navy Yard for what I remember was a repair to the ship, and I think we must have left for Cuban waters upon leaving Philadelphia.

I can't remember dates but we must have arrived there in mid Sept. 1945 and went through training exercises for a few weeks.

We had to have started back in early October to have been in the hurricane I described in an earlier e-mail. I did a Google search for hurricane activity in Atlantic waters in 1945 and the 11th and last storm of the season occurred between Oct. 10 thru Oct. 16. This had to have been the one we were in as it was described as follows. The hurricane passed over Cuba on a north, north, easterly course, veering out into the open waters of the Atlantic. It was a category 2 hurricane with wind speed reaching 95 mph and it passed close to the continental US, hitting the eastern seaboard from Fla. north to perhaps New York. I can remember during the storm hearing once that we were in the Cape Hatteras area off the coast of North Carolina as we proceeded north to Boston. We must have encountered the storm soon after leaving Gitmo to have been in it for 4 days. The 10th storm that season went across the gulf and hit Texas and it was in September so it could not have been the one we were in.

I wish I could be more precise with dates but they are not available from my memory. I sure would like to read the ships log tor the months of September 1945 thru February 1946.

(The following information has been copied from the upper right part of the large picture).

The U.S.S. Helena was ordered by the Navy Department on September 9, 1940, and its keel laid on September 9, 1943, at the Bethlehem Steel Company, Quincey Mass. The ship was launched on April 28, 1945 and she was commissioned on September 4, 1945. A little too late to participate in the war but early enough to spread good-will to other countries and to secure peace.
The ships armament consists of nine heavy 8-inch 55's, twelve 5-inch 38's and numerous 40 mm guns. It also carries two catapult planes on its fantail which are used as observation planes. On its first trip to New York the crew of the ship received a promise that they were going to see a lot and they did, for they put to sea - destination, Guantanamo Bay, Cuba for a two and a half month shake-down cruise.
Arriving at Guantanamo Bay on the third of November the ship started a series of training cruises. On January 31, the Helena completed its shakedown cruise and headed for home, arriving at Boston, Mass., February 4. Taking eight days off to provision the ship, the Helena pointed her bow towards England. After arriving at Portsmouth, England, on the 21st of February, the crew was given liberty until March 11, the day they left for Portland, England. After seventeen days of sight-seeing they were once more on the seas, this time the destination was Gibralter. Three days after arrival the ship hoisted its anchor and was off for Southampton, England, where it stayed for three days, then to Davenport, England, for another three days. The ship then left England and proceeded to Edinburgh, Scotland for an eight day visit with Scotlanders. On April 28 after a five day visit to Southampton, England, the ship once more put to sea. Two days later the ship was again at Gibralter. On the fourth of May the “Traveling Helena” sighted Toulon, France, and stayed there for three days. Naples, Italy, was the next stop which was made on May 11. The ship headed for sea again passing through the Suez Canal under a blistering sun after four days at Port Said, Egypt. The ship made its way to Columbo on the island of Ceylon. Four days at Columbo and four more at Singapore, and on the 18th of June the ship pulled into the harbor at Tsingtao, China. After nine months of China - riding rickshaws, eating Chinese foods, visiting Shanghai and Hong Kong - the ship was ready to come home. On March 22, 1947 the homeward-bound pennant was two-blocked and the ship wound its way through the Wangpoo River homeward bound. On this voyage the ship stopped at Guam for three days and at Pearl Harbor for five days. Finally the ship felt its way through a heavy fog into the protective harbor at San Pedro, California. The trip was over and the Helena was slated for dry-dock and duty in the states. 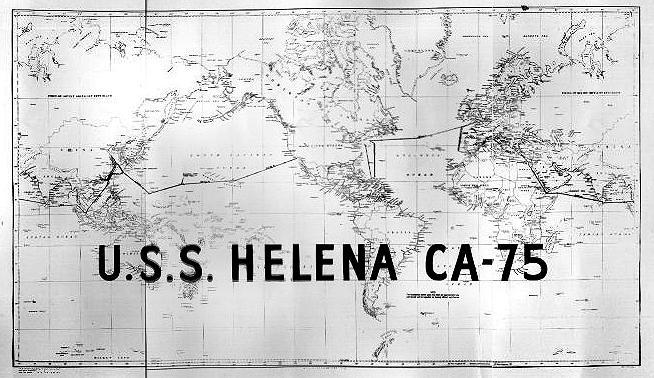 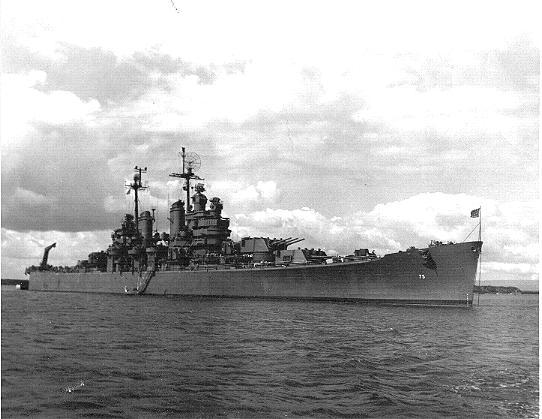 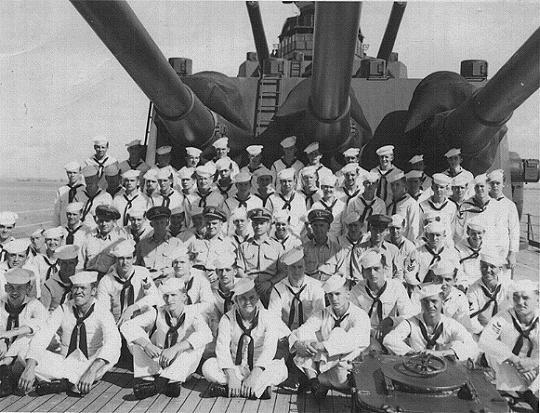 "F" Division. Taken at Gitmo Bay during the shakedown cruise