During the years of the life of the U.S. NAVAL STATION, LONG BEACH, Calif., a weekly newspaper was produced.
The "Seahorse".

From left to right:
TROPICAL CHANGE-OF-COMMAND
on the heavy cruiser USS Helena was held April 23 at Guam, Marianas Island. Departing Commanding Officer Captain Nels C. Johnson was relieved by
Navy Cross holder Captain Draper L. Kauffman in ceremonies held on the fantail of the ship.
Posted to the Seahorse 6 May 1960

AN ARRAY OF LIGHTS
displayed the USS Helena in the harbor at Sydney, Australia, during the first two weeks of May to participate in the annual Coral Sea Celebration.
The ship was photographed by time exposure. Kirby Neweman, SN, of Paul Ida., then sneaked into the same picture to be double exposed with flash.
Posted to the Seahorse 3 June 1960 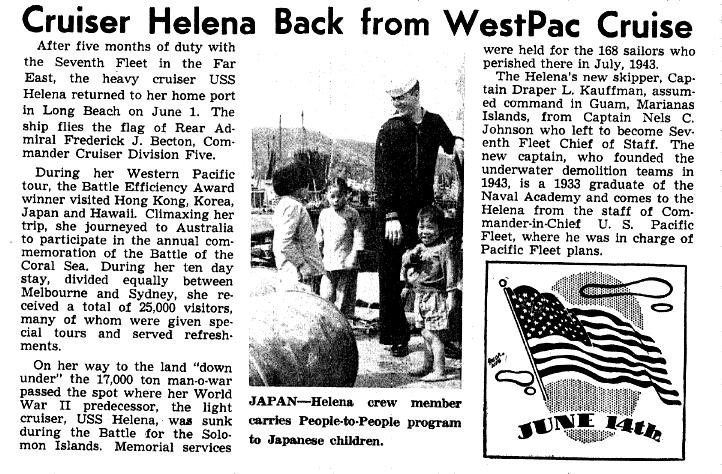 From left to right:
LEAVING USS HELENA
last Friday after the heavy cruiser had served as his flagship as Commander, Cruiser Division Five, for the past seven months is Rear Admiral J. Julian Becton.
Radm. Becton relieved Rear Admiral Charles K. Bergin as Commander, Mine Force Pacific Fleet, in a change-of-command ceremony July 16.
He will also continue as ComCruDiv Five.
Posted to the Seahorse 22 July 1960

OVER 4,000 VISITORS
crossed the gangway of the USS Helena last weekend.
The Helena held open house for general visitors on July 2, 3 and 4.
The ship, which was at full dress for the holiday, returned from the Far East June 2, where she visited seven countries from Korea to Australia.
On July 15 she will enter the San Francisco Naval Shipyards for an overhaul.
Posted to the Seahorse 8 July 1960