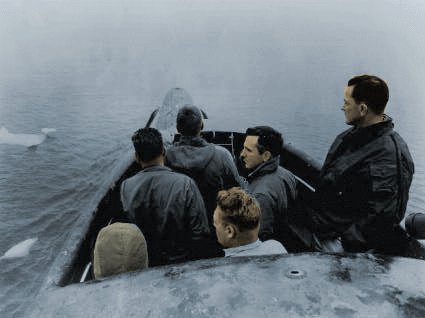 and let me share with you a glimpse of the life I so dearly loved . . .

I liked standing on the bridge wing at sunrise with salt spray in my faceand clean ocean winds whipping in from the four quarters of the
globe I liked the sounds of the Navy - the piercing trill of the boatswains pipe, the syncopated clangor of the ship's bell on the quarterdeck,
harsh, and the strong language and laughter of sailors at work.

I liked the lean angular names of Navy "tin-cans" and escorts, mementos of heroes who went before us.

I liked the tempo of a Navy band.

I liked liberty call and the spicy scent of a foreign port.
I even liked the never ending paperwork and all hands working parties
as my ship filled herself with the multitude of supplies, and to cut ties
to the land and carry out her mission anywhere on the globe where
there was water to float her.

I liked sailors, officers and enlisted men from all parts of the land,
farms of the Midwest, small towns of New England, from the big cities, the mountains and the prairies, from all walks of life. I trusted and depended on
them as they trusted and depended on me -- for professional competence, for comradeship, for strength and courage.
In a word, they were all "shipmates"; then and forever.

I liked the surge of adventure in my heart, when the word was passed: ''Now Hear This - Now set the special sea and anchor detail - all hands
to quarters for leaving port!" I truly liked the infectious thrill
of sighting home again, with the waving hands of welcoming family
and friends waiting pier side.

The work was hard and dangerous; the going rough at times; the
parting from loved ones painful, but the companionship of robust
Navy laughter, the "all for one and one for all" philosophy of the sea was ever present. I liked the fierce and dangerous activity on the flight deck of aircraft
carriers, earlier named for battles won but sadly now named for politicians: Enterprise, Independence, Boxer, Princeton and oh so many more, some lost
in battle, and sadly many scrapped.
And so tearfully seeing our great ones being sunk to make a reef,
truly sad indeed - such a waste.

I liked the names of the aircraft and helicopters; Skyraider, Intruder,
Sea King, Phantom, Skyhawk, Demon, Skywarrior, Corsair, and many more that bring to mind offensive and defensive orders of battle.

I liked the excitement of an alongside replenishment as my ship
slid in alongside an oiler and the cry of "Standby to receive shot lines" prefaced the hard work of rigging span wires (high-lines) and fuel
hoses echoed across the narrow gap of water between the ships and welcomed the mail, fresh milk, fruit and vegetables that sometimes accompanied the fuel.
I liked the serenity of the sea after a day of hard ship's work,
as flying fish flitted across the wave tops and sunset gave way to
night, and the bosun's mate's after-supper call over the speaker
system: "Let's have a clean sweep down, fore and aft, empty
all trash over the transom. The smoking lamp is now lighted".

I liked the feel of the Navy in darkness - the masthead and range
lights, the red and green navigation lights and stern light, the
pulsating phosphorescence of radar repeaters - they cut through
the dusk and joined with the mirror of stars overhead.

I liked drifting off to sleep lulled by the myriad noises large and
small that told me that my ship was alive and well, and that my shipmates on watch would keep me safe.

I liked quiet mid-watches with the aroma of strong coffee - the
lifeblood of the Navy permeating everywhere. I liked hectic watches
when the exacting minuet of haze-gray shapes racing at flank speed
kept all hands on a razor edge of alertness.

I liked the sudden electricity of "General quarters, general quarters,
all hands man your battle stations," followed by the hurried clamor
of running feet on ladders and the resounding thump of watertight
doors as the ship transformed herself in a few brief seconds from a peaceful workplace to a weapon of war - ready for anything.

I liked the sight of space-age equipment manned by youngsters
clad in dungarees and sound-powered phones that their grandfathers would still recognize.

I liked the traditions of the Navy and the men and now women
who made them. I liked the proud names of Navy heroes: Halsey,
Nimitz, Perry, Farragut, John Paul Jones, Burke, Osborn and Jenks.

A sailor could find much in the Navy: comrades-in-arms, pride
in self and country, mastery of the seaman's trade. An adolescent
could find adulthood. In years to come, when sailors are home from
the sea, we will still remember with fondness and respect the ocean
in all its moods, the impossible shimmering mirror calm and the
storm-tossed dark blue water surging over the bow.

Then there will come again a faint whiff of stack gas, a faint echo of engine and rudder orders, a vision of the bright bunting of signal flags
snapping at the yardarm, a refrain of hearty laughter in the wardroom and Chief's quarters and mess decks.

Once ashore for good we grow humble about our Navy days, when the seas were a part of us and a new port of call was ever over the horizon.

Remembering this, WE stand taller and say...

"I WAS A SAILOR ONCE & THE
MEMORIES NEVER GO AWAY, OLD SAILORS NEVER DIE -
THEY JUST FADE AWAY!" 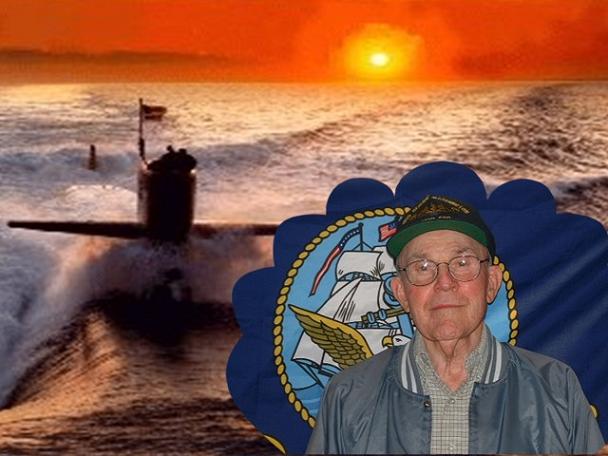