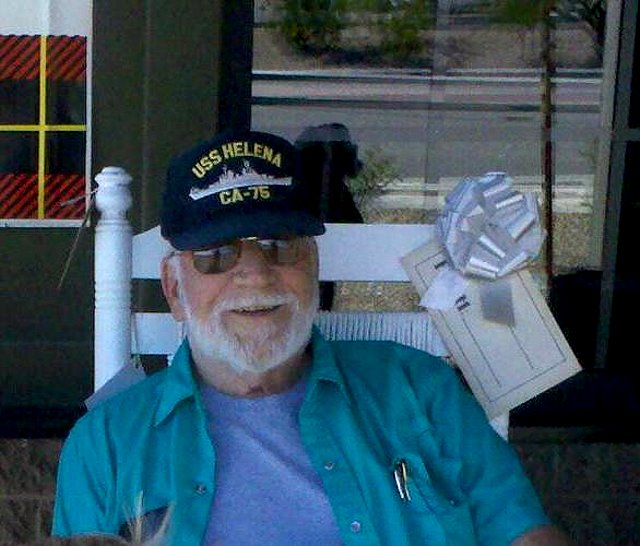 Hey Guys, I've finished my last tour here on Earth, for my country, family and friends.
Please be advised that I will be unable to answer the next call for "All Hands Fall In For Muster".

Richard E. Roof (Dick) was born in Grove City, Ohio on March 5, 1932.
Being one of six children, he enlisted in the Navy at 16. Dick proudly served on the USS Helena
where he bravely fought in the Korean War. He was a lifetime member of the USS Helena Organization
and wore his USS Helena hat until he finished his final tour of duty on June 29, 2014.
He volunteered at the American Legion as apart of the color guard, Post 107, where he was also a lifetime member.
He will be sorely missed by his family and close friends which includes his son, Richard E. Roof Jr. and wife, Kelly;
grandson, Joshua Richard; daughter Debora Robbins and husband, James; and grandchildren Nicholas and Tiana;
and his close friends Warren (Dave) and Mary Davis; John and Becky Pierce; Jim and Cecelia McNamee.

A Memorial Service will be held on July 31st at 1PM, at the
National Memorial Cemetary of Arizona, 23029 North Cave Creek Road, Phoenix, AZ 85024.