(The following "letter" copied from the CREW'S BOOK USS HELENA 1952.)


There is some really good news to write today-we're heading for home! It seems like a long time since May 20th, when we left Long Beach. In fact, it will be seven months by the time we dock in our home port.

One way or another, we have managed to keep busy the whole time. Most of the seven months were spent at sea, of course, operating off the east coast of Korea, but we also made some good liberties in Japan. We usually spent thirty days at sea followed by about ten days in port.
Even though the operating schedule was a strenuous one, I did find some spare time for myself. I was able to keep my camera busy snapping shots here and there, and I made up a photo album with pictures taken throughout the cruise. My idea was to keep a record of our activities as sea, the things we saw and did in port, and life on board the Helena.

I think you could say we had a three-fold job at sea. Our first job was to keep enemy supply lines cut. Since we control the seas, the only way the enemy can get supplies and reinforcements to the front lines is over land. We spent a lot of time cutting his railways, roads and bridges in such strange sounding places as Wonsan, Songjin, Tanchon, Kojo,Chongjin, and Hungnam.
The second task was supporting our own troops on the front lines. We steamed back and forth on the "bombline" firing at bunkers, gun positions, trenches, supply dumps, and troop concentrations. The idea was to keep the enemy off balance and give our troops a hand.
The third assignment, which gave us the most excitement, was acting as a search and rescue team for any of our pilots who were forced down. We carried a helicopter which made quite a name for itself by dashing as much as thirty miles inland, through thick anti-aircraft fire, to pick up a pilot. Believe me, nobody can grin as wide as a pilot who has just been rescued from behind enemy lines. 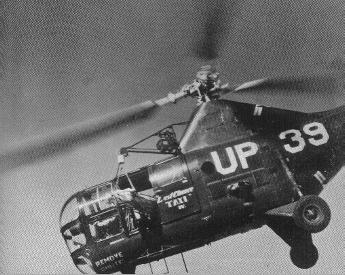 No job is too tough for the helicopter crew and errands of
mercy are their specialty. It often happens that a sick
or wounded sailor depends on the "whirly bird" to get
him back to the safety of the ship.
.
Sometimes we got an unusual assignment. One of these was acting as flagship for the bombardment group during the amphibious demonstration near Kojo. Our side made a feint at the beaches there to make the enemy shuffle his troops around and to show them what we could do if we really wanted to.
It wasn't all work all the time, however. We storred at three different ports, Yokosuka, Nagoya, and Kobe, where we had a chance to see some of the best sights in Japan, as well as to rest up and enjoy ourselves.
I'm sending the photo album along with this letter, hoping that you will like it, and that it will give you an idea of what the Helena has been up to during the last seven months.