HELENA was in the berth normally occupied by the Pacific Fleet flagship Pennsylvania when the Japanese arrived on Sunday morning 7 December 1941. A single aerial torpedo passed under the minelayer "Oglala," which was moored alongside, and hit HELENA amidships on her starboard side. Watertignt integrity was quickly achieved by the ship's crew, and her enthusiastic anti-aircraft fire discouraged enemy airmen from attacking the cruiser again at close range. Partially repaired at Pearl, HELENA steamed to San Francisco for permanent repair and overhaul. 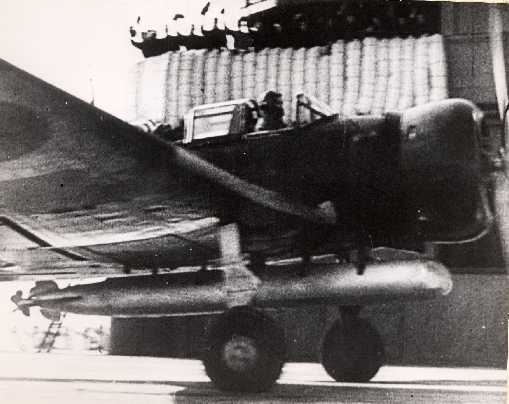 Captured Japanese newsreel of a Torpedo Plane taking off to attack Pearl Harbor on December 7, 1941.
The USS Helena CL 50 was hit by a torpedo from a plane like this.
(Picture provided by Charlie McClelland)

Off Guadalcanal on 15 September 1942, HELENA's crew helped rescue survivors of carrier "Wasp" which was sunk by submarine torpedoes. Four weeks later the cruiser exacted vengeance for earlier wounds by pouring 6-inch shells into cruiser "Furutaka" and destroyer "Fubuki" (both were sunk in this action) and other enemy warships in the 11-12 October Battle of Cape Esperance (see "Salt Lake City" for details of battle). And four weeks after Cape Esperance, HELENA was one of 13 Americal warships that fought in the 13 November Naval Battle of Guadalcanal . She was one of four that was still operational the following day.

In the early months of 1943 the cruiser was primarily occupied with shore bombardments in the New Georgia area. On 5 July 1943 she began her last operation by escorting transports to landings on New Georgia and by providing covering fire. Challenged by the enemy on the night of 6 July in what history remembers as the Battle of Kula Gulf, HELENA turned her guns toward the 10 Japanese destroyers. Of the three cruisers and four destroyers in the American force, HELENA became the favorite target of aim for Japanese torpedoes because she lacked flashless powder. "Honolulu" and "St. Louis" did have flashless powder for their salvos and the American destroyers initially held fire trying to set up a torpedo launch. Believed by the Japanese to be firing 6-inch machine guns, HELENA blazed away and contirbuted to the sinking of enemy destroyer "Niizuki" before the first of three Japanese torpedoes exploded against her hull.

The first torpedo hit below number one turret and sheared off the bow of the cruiser. The next two torpedoes hit under the second stack. In only a few minutes the cruiser jackknifed and sank. Most of the cruiser's survivors were picked up before morning, but many were not saved until 11 days later. Some of those not rescued on the 6th clustered around the slowly sinking bow, made land and were rescued the following day. A larger group--considerably aided by lifeboats and lifejackets dropped from a Navy plane and by two coastwatchers and natives of Vella Lavella--was picked up by destroyers on 17 July after several harrowing days in the water and on the enemy-held island. One hundred and sixty-eight men of the great ship did not survive the battle or the abandonment. Many of the survivors, like those of cruisers lost earlier, were reassigned to new cruisers (over 400 of HELENA's crew went to the new "Houston" [CL-81]) and battleships--HELENA's fighting spirit lived on. Of the 10 American cruisers lost in World War II, HELENA was the last until "Indianapolis" was lost only days before the end of the war.